One of the questions from my previous post asked about the BERNINA long arm, to please give my thoughts. Note: today’s photos are linked from the BERNINA website, I have none of my own from the Ambassador Retreat as I was busy stitching happily along.
First thought, “it’s a BERNINA, how could I not love it?” Well there was that strong possibility that I would not love it so much. It might not be quite right.
Over the years I’ve stitched on lots of long arms at quilt shows wondering if the long arm was the way to go, because “you can’t do that on a home sewing machine.” There is a difference between the long arm and the domestic machine and essentially it’s do we move the pencil over the paper or move the paper under the pencil. I’m heading out a step further and saying that I think that essentially the movements are the same, it’s the layout of the quilt. That layout does make a huge difference for a lot of people. So if quilting on a domestic isn’t working, the bulk of a quilt is hard to handle then by all means work on a long arm. I will say that with some practice I could switch back and forth between the two. (Pssst – there’s that word again, Practice)

A bit about the Q 24: the user interface should look quite familiar. It’s about the same as you’d find on the computerized BERNINA’s making navigating around quite easy. The background color and texture are changeable and a welcome greeting can be programmed in. Not a high priority but fun.

There are 3 BERNINA Stitch Regulator Modes; BSR 1 and BSR 2 are the same as on the home sewing machines and BSR 3 is a basting stitch, and there is a Manual Mode.

Any of the BERNINA hopping feet will fit on this machine so you’ve got your choice of feet. This machine uses home sewing machine needles so it’s unlikely that we’ll run out and if we do, goodness gracious it’s just a trip to our local quilt shop for what we need.

The threading path on this is quite easy beginning over and slightly back from the user interface. It’s similar (with some differences) to a home sewing machine. BERNINA has incorporated the needle threader making that part a snap. The Bobbin winder is on board, place the bobbin on the winder, follow the thread path and fill that sucker up. The bobbin goes in like any other push-in bobbin and on this machine the door closes.

I’ve mentioned I quilt as much by sound as I do by sight. Partly what I’m listening for is the speed of the machine and the bobbin. On my 1080 I could hear when the bobbin was running out and most of the time I can on the B 780. The sound of this long arm is similar to the B 780 and the 1080. There’s something just right about it. I could listen to it all day.

And the movement. . . this long arm moves with ease and finesse. I was doing some of my teeny tiny pebbles while we were stitching on them. As a teacher I will tell you that stitching around the motifs on the fabric is one of the best ways to practice and that’s what I started out doing, just stitching around the motifs on the fabric loaded onto the frame. I was getting fairly close to being on those lines with little effort, with some serious practice I’d be there soon. 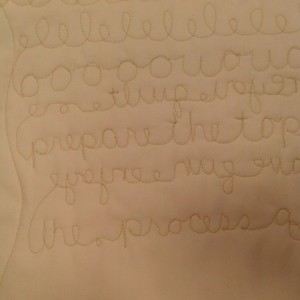 If I had the foot print for the machine the Q 24 would be my long arm of choice. There, I’ve said it. I like this long arm just based on the features I’ve shared here.

The one quilting photo from the retreat I can share is this one. We were learning more about the BERNINA Stitch Regulator (on the home sewing machine) and I started stitching this out. you might notice that some of the words are going left to right and some are going right to left. Yep, I can write backwards.
Just like learning to write cursive well took us some time, learning to quilt well will take some time. Either way…have fun. 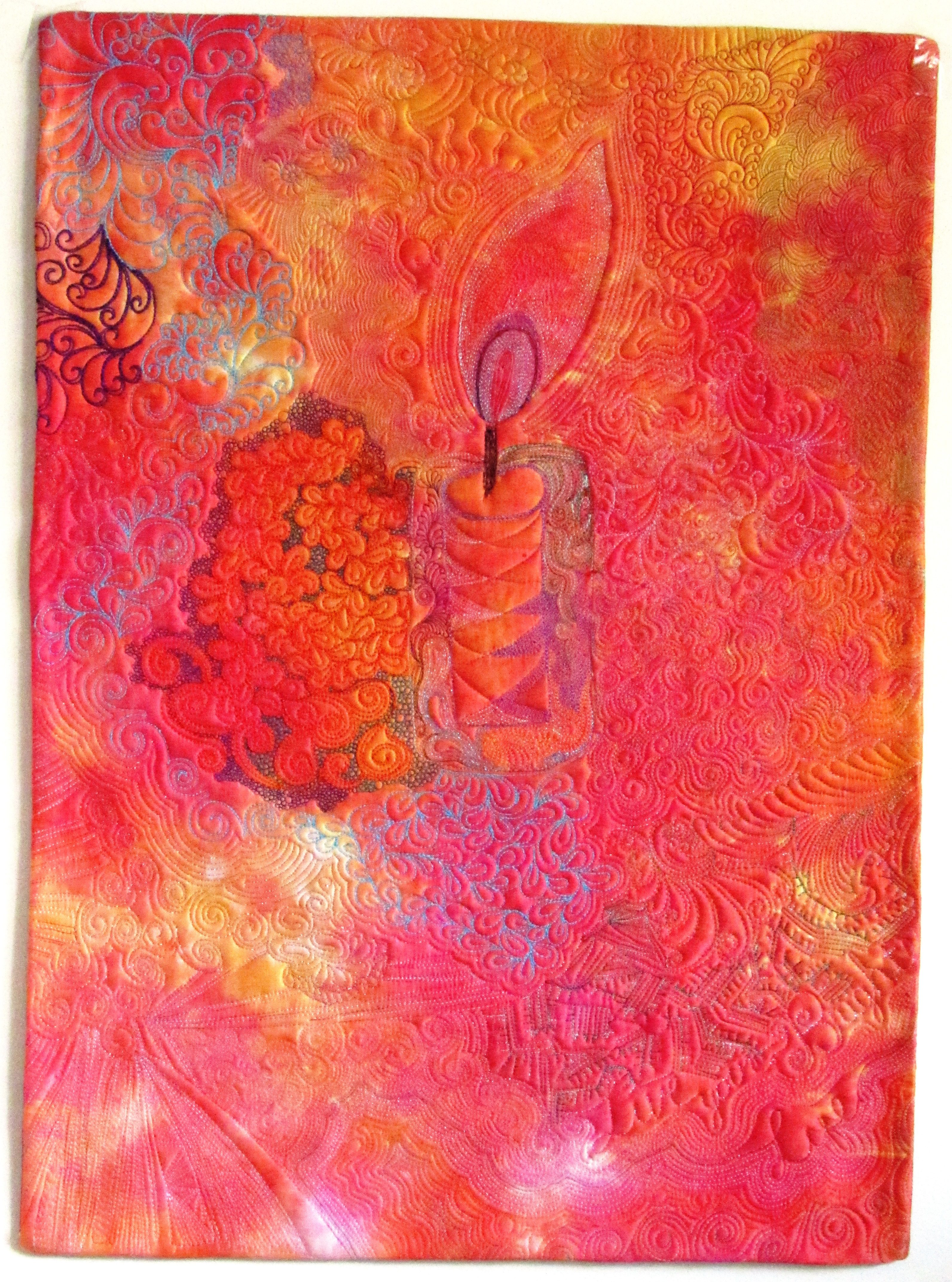